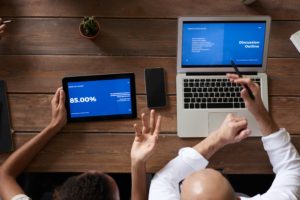 One of the more ubiquitous rituals in Corporate America is the performance review process. Having gone through this at several companies, I’d like to share my varying experiences at places like RR Donnelley, Navistar International Truck & Engine, Ariba (FreeMarkets) and others. I’ll refer to the places I’ve worked at as Company A, Company B, Company C, etc. The reason why it is a valid assumption that one can ignore a company’s performance evaluation process is that it in most cases process integrity is not maintained. It becomes more of a popularity contest than an objective evaluation.

The grand and lofty expectations of objectively quantifying how one lives the company’s values and achieves superior results usually go by the wayside for any number of reasons. It could be an economic downturn or that things are humming along fine so there’s no need to expend much effort on this mundane HR process. Or it could be that you do not have the right chemistry with your boss and that will cause objectivity to suffer. However we choose to view it, more often than not it will turn out to be a subjective exercise.

At company A, I had an interesting experience, i.e. a complete reversal of fortune within the span of a year and a half. My first review was a few months after I joined and it was above expectations stating that I was doing great. Incidentally, the company was amidst unprecedented growth. Fast forward a year and everything had fallen off a cliff. Now that a precipitous decline was underway, nothing anyone did on the team was good enough and ratings plunged.

At company B this process actually seemed to be as painful for HR as it was for the employees. Interestingly enough, it didn’t seem to matter whether the company was performing well or below par. There was no interest in making this a worthwhile effort beyond the perfunctory two-page form to fill out. What I found truly horrific was that most managers would simply put I concur next to the self-appraisal done by the employees on the evaluation form. Talk about barely lifting a finger! All of this despite having an official 10-page guide on how to come up with SMART (stands for: specific, measurable, attainable, realistic and timely) goals and assessing objectively.

At company C, I was told that I basically walk on water. Now to be fair, this company had the most robust performance assessment process of all my former employers. Not only was everyone challenged to put forth SMART goals, but they were public as was its tracking for all to see in our department. Once a quarter we had a one-on-one meeting with our manager to review performance and ensure we were on track and come up with plans if we were not. Now the fact that I was categorized as a high-potential and high performing employee did not do either me or the company very much good considering I was told all of this after I had given my notice to leave. Since my manager had already done my performance evaluation he wanted me to have it. While I appreciated the glowing words, it was unfortunate that it had to come to the fact that our company was in the middle of a merger with many people departing that they began the process of trying to retain their people. While I was generally aware that I had exceeded my performance targets and was given the periodic pat on the back, there wasn’t any discussion of a career path or potential next roles during the course of the year.

At company D, I was told by a quirky boss that I was outspoken and that my sense of humor was perceived and construed as being abrasive. Since this was a dynamic, start-up environment we all had revolving managers and direct reports. None of my other managers pointed out these particular traits as an area of improvement. Point being that my performance itself was not in question. As a result of which I did not let one person’s subjective view affect my confidence or style. In fact, in subsequent years and at most places, my sense of humor was usually singled out as an asset in building team rapport and business relationships.

At company E, in a course of a few months I went from being told that I have a lot more strengths than development needs to being told that I did not have a great year, just plain mediocre. What made this especially appalling was that in this instance leadership never took the time to come up with realistic and practical goals. When the company realized that there wasn’t really any career path and wanted to save on bonus payouts then suddenly this annual performance evaluation ritual took on a lot more importance. Since goals were not reset or recalibrated during the year, this painful exercise in futility became all the more transparent for employees.

Having shared the above, do I think that the performance evaluation process is completely without merit (pun intended)? Probably not. However, I do not let these performance reviews define or label me. The value I have derived from these is limited to the extent that it helped increase my self-awareness. This in turn helped me improve myself and my team. While it may be tempting to write this ritual off completely, it would probably be unwise to do so. In most of my experiences there is usually some sort of financial remuneration tied to this exercise. In some cases you may find there is more at stake than you’d like and thus you have to ensure you go through the motions to the best of your ability. If for nothing else than to take the opportunity for self-reflection and learning. Most of these performance evaluations have a self-appraisal section and I felt that I owed it to myself to take the time and effort to elaborate on what I’ve accomplished, where I fell short, and what I want to achieve in the future.

There is one other aspect I am cognitive and conscientious of when it comes to this ritual. And that pertains to my role as an appraiser. All the examples cited above have helped me learn what not to do in the realm of performance evaluations. And I have strived to incorporate these important lessons by trying to do the opposite whilst evaluating my team members. If leadership and team development is important to you, than there’s no easier way to show your people indifference than to put forth a half-hearted and shoddy excuse of a performance evaluation.

I admit that it is sometimes difficult to motivate oneself when the vast majority can’t be bothered about this process. But if it’s done sincerely it will come through and perhaps even be appreciated. At the end of the day, similar to other aspects of corporate life, this too is a trade-off. You do not want it to become an all-consuming and all-important yearly exercise. But you also don’t want be callous about it to the point that it has monetary consequences. Because let’s face it, when does one ever get asked to show their past performance appraisals to a future employer? Probably never. At least that’s been my experience.